As of this writing, all the areas where San Diego residents usually off-road are open except Corral Canyon, and there is no overnight camping at Ocotillo Wells and Lark Canyon. But there is plenty of other trouble for off-roaders to worry about.

Gypsum railroad
There is a short, private railroad that goes from the Gypsum Mine at the end of Split Mountain Road to Plaster City and the train can run seven days a week, as many as three times a day. The manager of the train recently contacted us regarding a problem. Three times recently the train was stopped because of people on the tracks. One time, the people stopped the train and wouldn’t move. The conductor called headquarters to call the sheriff to deal with them. Lots of people camp along the tracks to off-road or shoot against the mountain and some people have been setting up their shooting stuff right on the tracks. The railroad manager asked for help getting the word out to stay off the tracks. I went by there the day after Thanksgiving to see for myself. In the past I have seen a lot of camps in that area, but this time I only saw one. I suspect the sheriff came through and spoke to people. If you like to camp in that area, please stay clear of the tracks.

Oceano Dunes
Oceano Dunes has a lot of challenges right now: five-plus lawsuits, virus closure, air pollution trouble, Coastal Commission issues and species problems. Because there are species listed on both State and Federal levels, State Parks needs both state (Habitat Conservation Plan) and federal (Environmental Assessment) documents to get an incidental take permit. This permit is required to allow activity where troubled species are. The Habitat Conservation Plan (531 pages, click here) and Environmental Assessment (366 pages, click here) for Oceano Dunes. I’ve read a ways into both documents and so far they seem objective. They are both open for comments now. Recently the Center for Biological Diversity filed a federal lawsuit against Oceano Dunes. From the CBD website: “The Center for Biological Diversity sued the California Department of Parks and Recreation today for continuing to allow motorized vehicle use that kills protected snowy plovers at Oceano Dunes State Vehicular Recreation Area.” Right now, Oceano Dunes is open for day use by street legal vehicles. Parks has announced a reopening plan to include OHV’s and camping, but have not published a timeline.

Corral Canyon
Corral Canyon is still closed to OHV use due to the Valley Fire that burned a few months ago. I flew over the area recently in a friend’s Cessna 172 to see what area actually burned. The closest fire damage I could see was a couple miles west of Los Pinos Mountain, far away from the riding area and only crossing Espinoza Road. The Forest posted signs that say, “there is no access to Corral Canyon OHV area due to fire damage repair work. Trails will open as soon as repairs are complete.” I have emailed and called the district manager, but he hasn’t responded yet. This is irresponsible management by the Forest and I will be applying more pressure on it to reopen the OHV area or justify closing it.

Off-road park near San Diego
While President Trump is not looking very good in his attempts to stay in office, the election has not been all bad. We have a new East San Diego County Supervisor, and his name is Joel Anderson! It was close. Immediately after the election he was down by 1,200 votes, but as mail-in ballots were counted, Joel pulled ahead and finally won by almost 300 out of 290,000 votes. We couldn’t be happier about this and have started to work on getting an off-road park near town. Don’t hold your breath; projects like this take years. But there is hope now that we won’t have political opposition to our form of recreation. For years, SDORC leaders worked on getting an off-road park open near town. Our efforts were always shot down, usually by County Supervisor Jacob. We had a few very viable projects that would have made many people happy, but we were never able to make it happen. Now with political support at all the levels of government, we have a real chance to open something. While this will take time, we have a better chance now than we have had in decades.

SDORC radio show
Our radio show is going great. Every Sunday at 12:00 noon we go on KCBQ 1170 am and 96.1 FM with Dave Stall, SDORC VP Audrey Mason, and myself. We discuss current off-road topics, both political and general interest. If you would like to advertise with us, like PRMI Mortgage and Wayne Miller Tires do, send us an email at info@sdorc.org and we will work out the details.

Don’t forget SDORC is a membership organization. We need membership money to fund our activities like our lobbyist, travel, storage and insurance. Our Lost Lizard Fun Run was canceled this year and we could use a hand. It is easy to join or donate by following the relevant link on our website. 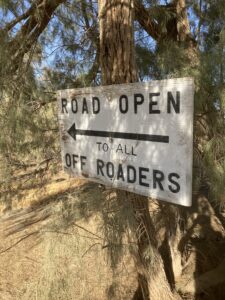