Legislation
The California legislative session ended in September and every bill that had a chance had to be passed by then. We follow state bills that affect off-roaders and here is where we stand:
Our reciprocity bill, AB232, has passed out and is on the governor’s desk. SB227, the red sticker bill, died in its last committee, Assembly Appropriations, chaired by Lorena Gonzalez Fletcher. SB433, a bill that would expand the Coastal Commission’s powers, passed to the governor. SB339, which would authorize a pilot program to look at charging drivers by the mile instead of by the gallon, passed to the governor. This is trying to solve how electric and high mileage hybrid cars could pay their fair share of road taxes. AB1512, the bill to get the state to let the Carnegie expansion land go, was killed and its language put into the budget trailer bill, with amendments. The budget trailer bill passed out. There is bad and good here. The bad is that Carnegie SVRA will never be expanding. The good side is that the bill specifically spells out that the state is to make a new off-road park. The bill also provides resources (money) to do this. I know many of you are shaking your head saying, “yeah, sure!” I know it will be difficult, but not impossible, to build a new off-road park. We can hope and our organization will help out as we can. We can thank our lobbyist for helping get the right language into the budget bill. We will keep you posted on updates as they come.

Superstition Area bombing range fence
The new bombing range fence east of Superstition open area is just about complete. The project manager sent me some pics of it and I am a little worried. It is a smooth wire fence with a wire about two feet up and another about four feet up. I don’t like fences, but the Navy says they need to keep people out. They have had to cancel bombing practice too many times. It takes a lot of planning to do bombing practice and to have the planes up and getting ready to drop bombs, only to have to abort because someone is there, hurts our readiness and wastes taxpayer money. Our problem with the fence is that it is difficult to see, especially during dusty times or at night. We are talking to the Navy and are interested in adding reflective material to the fence. If the Navy says yes, but doesn’t want to do it, we will buy materials and get it installed. Stay tuned to find out how this goes. 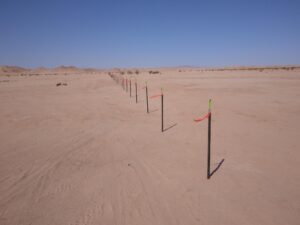 Big Bear trail issue
I was dirt bike riding in Big Bear recently and found a problem. We were looking for a street legal route on the California Trail Users Coalition map near Lake Arrowhead and found it marked as a hiking trail. It seemed like it should be open, so I contacted Randy Banis and Bruce Whitcher (who worked on the map’s creation) to see how it should be. According to Avenza Maps and the San Bernardino National Forest website, it is an open, street legal route. I asked a friend, who has a house up there, to go have a look. The route is 2N25Y, in case you are up there and want to let me know.
Speaking about the forest, all 18 of them in California are closed right now. Completely closed. The reason is that the wildfires burning now are using so much of every forest’s resources there is little left in case another serious fire starts. The National Forests all share equipment and personnel, so the forests that are not burning have hardly anything left. While fires can start from a variety of reasons, most are started by people.

Lakeside Rodeo Parade
We were recently at the Lakeside Rodeo Parade once again with the largest contingent. Our contingent consisted of off-road vehicles, along with kids on BMX bikes from Cactus Park. Immediately following the parade, Audrey ran up to Escondido to help out in our booth in the Off-Road Nights expo. At the expo we passed out Lost Lizard Fun Run flyers and asked people to come to our event. It was great to see so many people that knew about the event and are excited to do it again with us.

Lost Lizard Run Run
There is still time to pre-enter our Fun Run. You can do so on our website. This will save you money and time at the event. When you arrive at the event, just give us your name and we will hand you a bag with everything you need in it. We are getting more great raffle prizes, so plan on getting some tickets. There will be a bunch of kids prizes, including two minibikes. I hear talk about wheels and a winch, as well as a hotel stay in Salton City. It looks like Imperial Valley Chrysler Dodge Jeep Ram will be our title sponsor, so if you are in Imperial Valley and need a Jeep, this is your best place to go.

DAC meeting
I will be attending a Desert Advisory Council (I am on the council) meeting on October 1 and 2 in El Centro. If you have a problem with how the BLM manages their land, this is the place to make your problem known. Not only do off-roaders have problems, but so do businesses, movie makers, rock hounds, nature lovers and renewable energy producers. The meeting is open to the public and they are always interesting to people who love the desert.